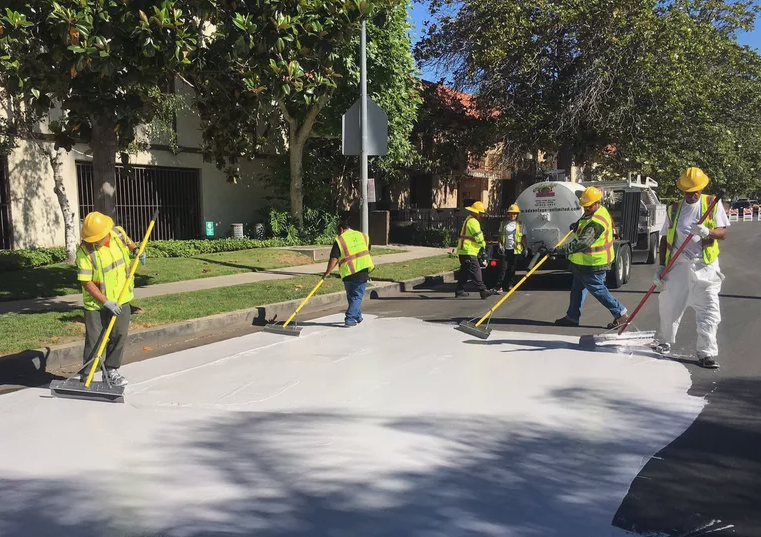 Why are Some Cities Painting their Roads White For centuries, city homeowners have continued to install white roofs to reduce the buildup of heat. And with the sweltering summerti ...

For centuries, city homeowners have continued to install white roofs to reduce the buildup of heat. And with the sweltering summertime surrounding the city, people seek newer, more innovative ways to beat the heat.

According to in-depth research, the systematic and strategic replacement of dark surfaces with white ones can help lower heat waves by at least 2 degrees Celsius and possibly even more. It is valid for cities, as well as rural areas. Here we discuss in-depth the concept and logic behind painting the roads white:

The urban heat island is a well-known meteorological phenomenon since big metropolis cities began emerging in the 19th century. Most city buildings and roads are fabricated from materials that absorb more solar radiation than they reflect. Typically, this energy is radiated off in the surrounding area in the form of sizzling hot heat.

CBS Los Angeles further explains this phenomenon; dark-colored asphalt typically absorbs 80 to 90% of the sun’s rays. It results in the road turning super hot with the temperature rise.

On a particularly sweltering day when the temperature hits 100 degrees, the surface temperature of the roads can spike up by 50 degrees. And when the baking streets radiate heat in the neighborhood, it creates a stifling condition for residents.

To combat this heat in an innovative and greener way, LA officials are painting their roads white. As per the bureau orders, all roads across the city are coated with an incredible off-white Cool Seal. This water-based asphalt emulsion is known to reflect the harmful rays of the sun rather than absorbing them.

Studies and tests show that this emulsion helps tone down the heat by an average of 10 to 15 degrees. Plus, to ensure the safety of the citizens, CoolSeal has been tested for wet skidding and durability.

An Expensive but Totally “Worth it” Process

Unfortunately, painting the seat with two layers of CoolSeal is a considerably expensive process. In fact, Los Angeles has to spend $40,000 per mile from the city coffers to paint the streets white. Plus, the coating lasts only seven years.

However, advocates and officials are confident in the white paint’s ripple effect on the city. A bonus of white-painted streets is that residents will be less likely to use their air conditioning. In this way, homeowners can save up on energy bills, as well as decrease harmful emissions.

Los Angeles is the first city to experiment with the phenomenon of lowering heatwaves via white-painted roads. As a consequence of its positive result, cities outside of LA that experience hot weather, such as Phoenix, consider following their example.

Currently, other cities are keeping a close look at how each test area fares. The locations, however, are 15 in total, with each being at least a block long and present in low-traffic areas.

David Sailor, a director of the Urban Climate Research Center at Arizona State University, says that he wants to observe and explore different strategies for a cooler city. Meanwhile, he also believes that there is more than one way to do so.

white roadswhy are some roads painted whitewhy roads are being painted