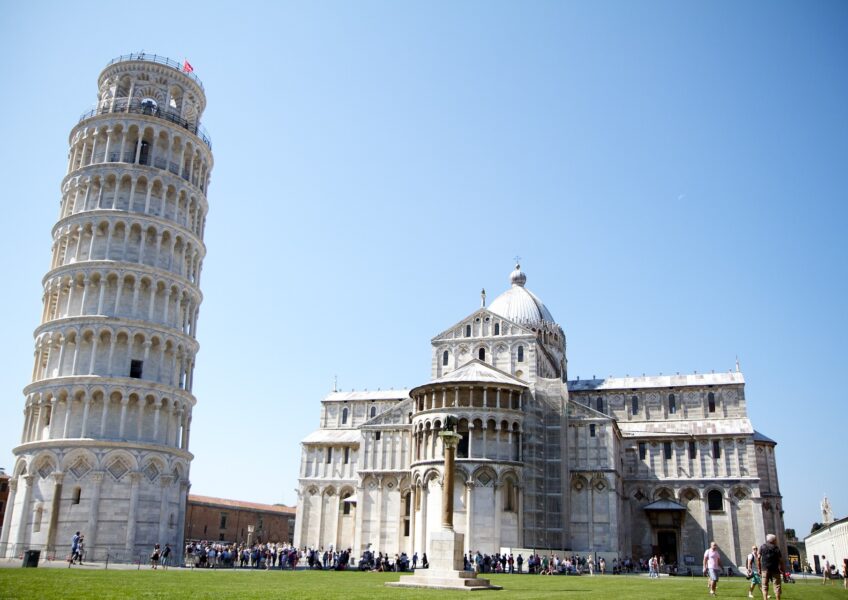 The Leaning Tower of Pisa is located in the Italian city of Pisa and is a freestanding bell tower of the city's cathedral. The tower is famous for its four-degree lean and is the t ...

The Leaning Tower of Pisa is located in the Italian city of Pisa and is a freestanding bell tower of the city’s cathedral. The tower is famous for its four-degree lean and is the third oldest structure in the city’s Cathedral Square.

The tower is 183.27 feet tall from the ground on the low side, and 185.93 feet on the high side. There are about 296 or 294 steps, with the seventh floor having two fewer steps on the north-facing staircase. The identity of the true architect is unknown. Some believe it was a 12-century artist of Pisa named Bonanno Pisano, or Diotisalvi because of the timing of construction and notable works such as the San Nicola bell tower and Baptistery, both located in Pisa.

The construction of the tower took over 199 years in a series of three stages. On August 9th, 1173, the foundations of the tower were laid, and work on the ground floor began. As the construction progressed to the second floor in 1178, the tower began to sink due to the soft ground which couldn’t support the tower.

Construction stopped for nearly a century because of continuous battles with Genoa, Lucca, and Florence. As time passed, the subsoil was able to settle, and construction continued again in 1233. To try and compensate for the lean of the tower in 1272, engineers designed upper floors with one side higher than the other, causing the tower to curve. In 1284 construction was paused again due to another battle.

Throughout the completion of the tower during the 14th century, the tower’s lean began to worsen, and by 1990 the tilt reached 5.5 degrees. Between 1993 and 2001 remedial work stabilized the tower and brought the tilt down to 3.97 degrees. Some of the bells were removed to reduce the weight of the tower, cables were tightened around the third level and anchored several hundred meters away, and 70 tons of soil was removed from the raised end. In May 2008, engineers announced that the tower had been stabilized enough that it had stopped moving for the first time in history.