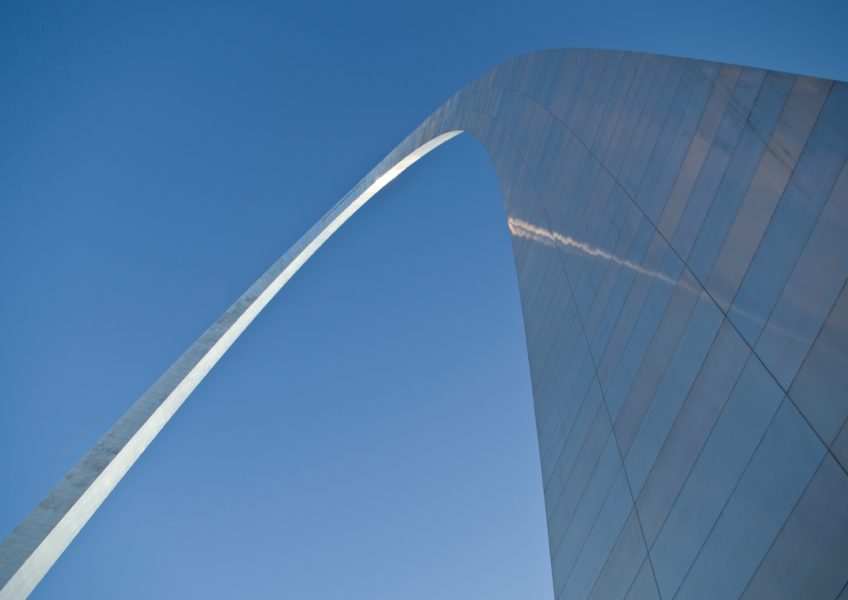 In 1947, the St. Louis Arch was designed by the architect Eero Saarinen and built as a weighted catenary arch. Standing at 630 feet, the St. Louis Gateway Arch is the tallest arch ...

In 1947, the St. Louis Arch was designed by the architect Eero Saarinen and built as a weighted catenary arch. Standing at 630 feet, the St. Louis Gateway Arch is the tallest arch in the world, the tallest man-made monument in the Western Hemisphere, and the tallest accessible building in Missouri.

The construction of the arch took almost two years beginning from February 12, 1963, to October 28, 1965, costing $13 million. The arch officially opened to the public on June 10, 1967, and was dedicated to “the American people.” The arch, also referred to as “The Gateway to the West,” is internationally recognized as a symbol of St. Louis and stands in the center of Gateway Arch National Park.

In the 1930’s a civic leader named Luther Ely Smith proposed to mayor Bernard Dickmann his vision of a memorial he believed would stimulate and revive the riverfront and economy. The idea was approved by the association with a goal of creating;

“A suitable and permanent public memorial to the men who made possible the western territorial expansion of the United States, particularly President Jefferson, his aides Livingston and Monroe, the great explorers’ Lewis and Clark, and the hardy hunters, trappers, frontiersmen, and pioneers who contributed to the territorial expansion and development of these United States, and thereby to bring before the public of this and future generations the history of our development and induce familiarity with the patriotic accomplishments of these great builders of our country.”
Wikipedia

An architectural competition comprising of two stages was held to single out one architect and design. The intentions of the design were to include;

“(a) an architectural memorial or memorials to Jefferson; dealing (b) with preservation of the site of Old St. Louis – landscaping, provision of an open-air campfire theater, re-erection or reproduction of a few typical old buildings, provision of a Museum interpreting the Westward movement; (c) a living memorial to Jefferson’s ‘vision of greater opportunities for men of all races and creeds;’ (d) recreational facilities, both sides of the river; and (e) parking facilities, access, relocation of railroads, placement of an interstate highway.”
Wikipedia

On May 25, 1948, Saarinen’s design was endorsed by the United States Territorial Expansion Memorial Commission. After many years of preparations and funding, the foundation for the structure was finally laid in 1961, with construction beginning February 12, 1963.

The Gateway Arch is constructed of 142, 12-foot long prefabricated sections of stainless steel, consisting of triangles spiraling and narrowing towards the top of the arch. Each section is filled with concrete and prestressed by 252 tension bars.