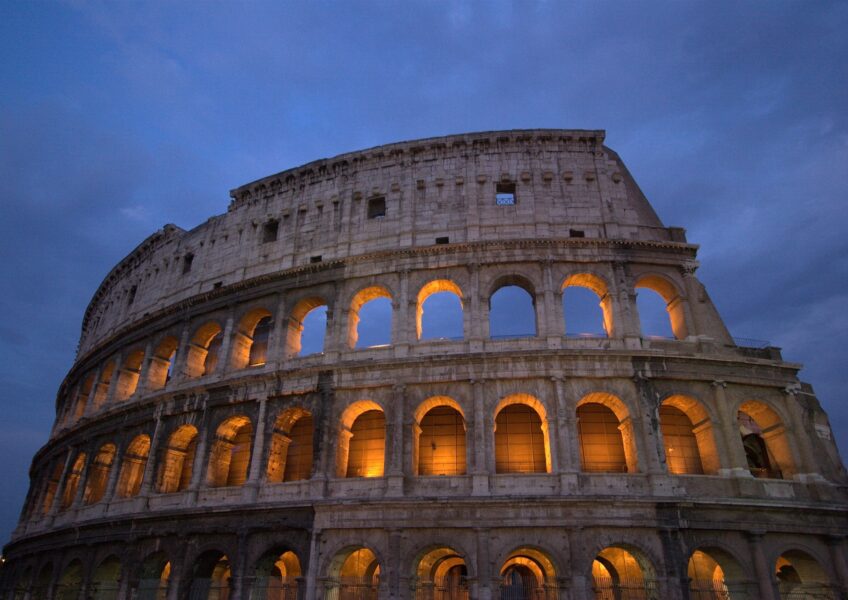 The Colosseum measures 620 feet by 513 feet with seating for more than 50,000 spectators and was the largest amphitheater in the Roman world. The Colosseum was active for four cent ...

The Colosseum measures 620 feet by 513 feet with seating for more than 50,000 spectators and was the largest amphitheater in the Roman world. The Colosseum was active for four centuries until the 6th century A.D. It stopped all operations after a struggling Western Roman Empire, distaste in gladiator combat, and damage from natural disasters like earthquakes and lightning.

The Colosseum, previously known as the Flavian Amphitheater was built by Emperor Vespasian of the Flavian dynasty as a gift to the Roman people in 70-72 A.D., and was officially opened in 80 A.D. by his son Titus. After its four centuries of use, it became neglected and was used as a source of building materials for cathedrals like St. Peter, the Palazzo Venezia, and St. John Lateran. At the beginning of the 18th century, many popes tried to conserve the Colosseum as a sacred Christian site.

Eventually, nearly two-thirds of the Colosseum had been destroyed due to weather, neglect, vandalism, and natural disasters. In the 1990’s, restoration began and have continued along with being one of Rome’s major tourist attractions with nearly seven million visitors yearly.

The $27.8 million restoration project of the Colosseum is being funded by an Italian fashion brand called Tod’s Group, as well as larger brands such as Bulgar, Fendi, and Diesel.

The first part of the restoration phase has been completed by Rome’s Archaeological Heritage Department, with the intention of bringing the Colosseum back to its former glory. The first phase consisted of surface cleaning and removing vehicular pollution that gave the Colosseum a dark look.

The second phase of the restoration includes working on the underground vaults and passages. It will begin with mapping a survey, then surface cleaning like the first phase, along with granting public access to areas that were previously too dangerous or fragile to visit. The arena flooring could potentially be replaced to support modern entertainment and eventually turn the Colosseum into an entertainment landmark.